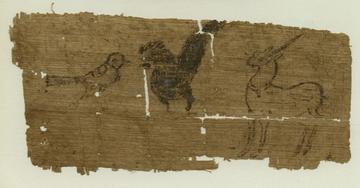 This database presents digitised images of the published papyri belonging to the Egypt Exploration Society and housed in the Sackler Library at Oxford. The collection comprises thousands of texts on papyrus and parchment and is the largest of its kind in the world. It includes principally literary, documentary, and other texts in Greek, dating from the second century BCE to the seventh century CE; other languages represented include Latin, Demotic, and Coptic. Most of the papyri come from excavations conducted at the site of Oxyrhynchus (modern Behnesa) by Oxford classicists Bernard Grenfell and Arthur Hunt in 1896–1907 on behalf of the Egypt Exploration Fund (now Society). Since then, scholars have worked continuously to catalogue, decipher, and publish this material.

The papyri represent the random waste paper of nine centuries of Graeco-Egyptian life. About a tenth is literary, that is, the fragmentary remains of ancient books; the rest are documents public and private, including codes, edicts, registers, official correspondence, census-returns, tax-assessments, petitions, court-records, sales, leases, wills, accounts, horoscopes, and private letters. The book-fragments provide early copies of the Greek (and some Latin) literature that we knew already, as well as literary works that were lost in the Middle Ages, such as the poetry of Sappho and the comedies of Menander. On the theological side, there are valuable early manuscripts of the Septuagint and New Testament and other Christian texts such as the First Apocalypse of James and Justin Martyr’s First Apology. Drawings and paintings on papyrus, though relatively few in number, illustrate the range of this little-known ancient art form, its uses, techniques, and choice of themes. The documents provide grass-roots evidence for the law, society, economy, and culture of Egypt from Ptolemaic, through Roman and Byzantine, into Arab rule. 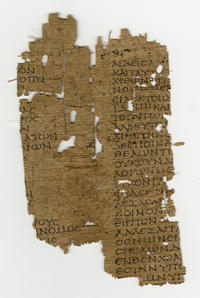 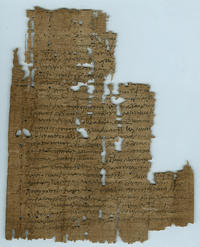 Images of the papyri up to vol. LXXIII of the The Oxyrhynchus Papyri were created by the Imaging Papyri Project, funded by the Arts and Humanities Research Council between 1998 and 2009. Images from later volumes were created by the successive projects on the Oxyrhynchus papyri funded by the AHRC and the British Academy since 2010. The database includes only papyri currently kept in the Sackler Library at Oxford: the vast majority of the papyri published in the early volumes of The Oxyrhynchus Papyri (I–XVIII), and some from later volumes, were distributed by the EES to other institutions. For details, see the Location-Lists or (for more up-to-date information) Trismegistos. Images of these papyri must be sought from the institutions in which they are kept.

The new SDS platform provides a stable, user-friendly long-term home for the database. Technical updates can be carried out centrally, without requiring ongoing IT support by project or faculty staff, and records can be uploaded and adjusted directly by project members. Hosting costs are covered by the SDS service (via the Humanities Division), thus ensuring the sustainability of the database.

The inventory numbers, many of which are published for the first time in the present database, often provide useful information concerning the context in which a particular papyrus was found: for a brief guide, see A. Jones, Astronomical Papyri from Oxyrhynchus (1999) 56–7.

The database is maintained by Amin Benaissa and W. Benjamin Henry (papyrology@classics.ox.ac.uk). Reproduction requests are handled by the EES and usually granted free of charge for academic purposes: see http://www.ees.ac.uk/reproduction-requests-and-fees.